Nassau Council of Chambers of Commerce

The county legislature has 19 members.

As of 2018, the population of Nassau County is 1,369,514 (est.). It was named for William of Nassau, Prince of Orange, who became King William III of England.  Its county seat is Mineola. Nassau and Suffolk counties are generally referred to as “Long Island” (as distinct from New York City) by area residents. Some also consider the New York City borough of Queens, just west of Nassau, to be part of Long Island (which, geographically, it is).

Our mission is to represent the concerns of the Nassau County business community. We promote economic security and enhanced economic growth. The Nassau Council is a strong united voice for commerce and an advocate for legislative issues that impact us. Promoting our “SHOP LOCAL” effort is at the forefront to insure a positive future for our businesses and communities.

Before you click and buy… Give “SHOP LOCAL” a Try! 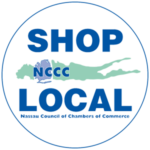